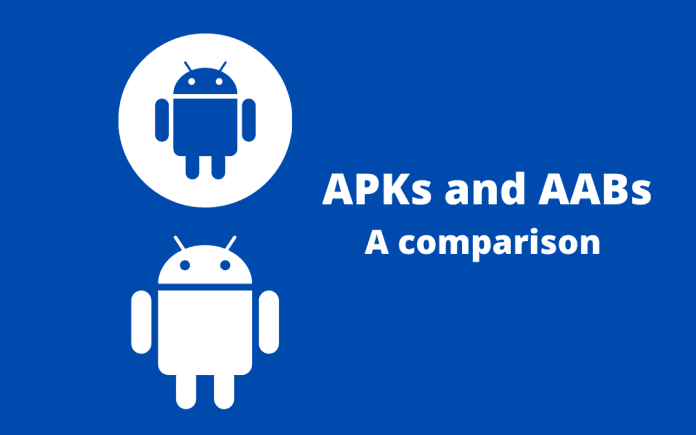 APKs vs AABs – What is the difference between the two Android files?

The mobile app world exploded in 2008 with the launch of the first iPhone. In hindsight, one has to marvel at the remarkable progress the app world has undergone in just over a decade.

The word ‘disruption’ is thrown around cheaply in tech blogs and tweets. However, the rise of mobile apps is a quintessential example of technology disruption. There is no other way to describe the widespread impact of mobile apps on our daily lives.

Some changes are visible on the surface. It was unforeseeable for a WordPress user to create an app without coding until a few years ago. Now DIY app builders like AppMySite make it possible to create a WordPress app for Android and iOS.

This is a visible sign of progression and naturally laudable.

However, there are various unseen changes in the mobile app world that pass by unchecked.

One of these changes is the arrival of AAB files in the Android ecosystem.

AABs were launched in 2018 as an alternative to APK files. Google has also recently made it clear that any company or developer submitting a new app after the first half of 2021 will need to provide an AAB build. The future of AABs in the Android ecosystem thus seems solidified.

This would naturally make anyone assume that APKs are on their way out. Understanding the difference between AABs and APKs can help solve most of these questions.

This piece provides a complete breakdown on the differences between these two Android files. We also discuss which is best suited for the long-term success of your app.

APKs (short for Android application package) are the preeminent standard of Android files. They’re used for the distribution and installation of APK files.

Technically, APKs are simply file extensions. Like other file extensions like zip and exe files, they are built to perform a specific purpose. APKs only work on an Android system and are essential for the installation of any app.

A simple way to look at APKs is to think of them as compressed versions of mobile apps. When they’re downloaded to an Android device, they can be unpacked into a mobile app.

The main problem with APKs is their size. To understand this, we have to first understand how developers have to approach app development.

There are a plethora of Android devices in the market. Each comes with a different screen size, processor, graphical capabilities, and other variations.

Does Whatsapp perform poorly on a low specs device when compared to a high-range premium smartphone? The differences in performance are generally insignificant because developers build the app to perform on a multitude of Android devices.

This need to create apps for a range of device configurations causes a direct increase in the size of APK files. A single APK file contains assets and resources to run an app on a myriad Android devices.  In other words, users have to download all the resources and assets onto their device storage even if some of them are not needed to make the app work.

This suggests an obvious inefficiency in the way APKs operate. High app sizes cause a whole range of problems, from lower install success rates to higher app churn. The graph below points to the same.

The arrival of AABs

AABs (short for Android application bundles) address some of the serious inefficiencies of APK files. Like APKs, AABs are also used for the distribution of Android apps. They are Android files which mark progression from the use of APKs for app installation.

Both APK and AAB builds are currently accepted during Android app submission on the Google Play Store. Google recently revealed plans to phase out APKs by making it mandatory for all new apps to be submitted with an AAB build from the second half of 2021.

AABs will become the defacto format to publish and install apps. The real question is this – how do AABs help improve upon APKs?

How do AABs work?

There would be no reason to bring AABs to the fore unless they solve the issues developers face working with APKs. App size is the main problem with APKs. Users have to unnecessarily download app resources they don’t need because of the innate structure of APK files.

Google Play parses through the different assets and resources in an AAB file and creates a whole set of split APK files. Each split APK caters to a specific device configuration.

Using an AAB build basically ensures app users don’t have to download unnecessary resources. App size is reduced significantly and the problem of high app churn with APKs is bypassed.

How are APKs and AABs different? A direct comparison

The sections above point to some differences between APKs and AABs. The table below summarizes the points covered.

Which one is best suited for your app?

Looking at the various advantages of AAB files, it is naturally advantageous to choose them over an APK build.

This is the right approach towards Android app submission. AABs show great promise when it comes to resolving some of the main problems APKs create. The move towards AABs shows a natural progression towards a better technical solution.

Many naturally assume APKs have lost their relevance with the move towards AABs. The previous sections clearly lay out why this assumption is wrong. The only way to install an Android app still happens to involve APKs. AABs are a better way of organizing app files and resources.

Furthermore, developers would still need an APK build to test an Android app before it goes live.

This piece provides a complete breakdown on the differences between APKs and AABs. Readers can learn about the essentials of APKs and where the need for AABs arises.

These technical differences may not peak the interest of someone using a codeless mobile app creator online. However, understanding the advantages of AABs over APKs can even help those using DIY app making solutions.

Since AABs will soon become the norm in the Android ecosystem, it is best for most developers to move away from APKs for app submission. This can also help them leverage the various benefits of using AAB files over APKs.