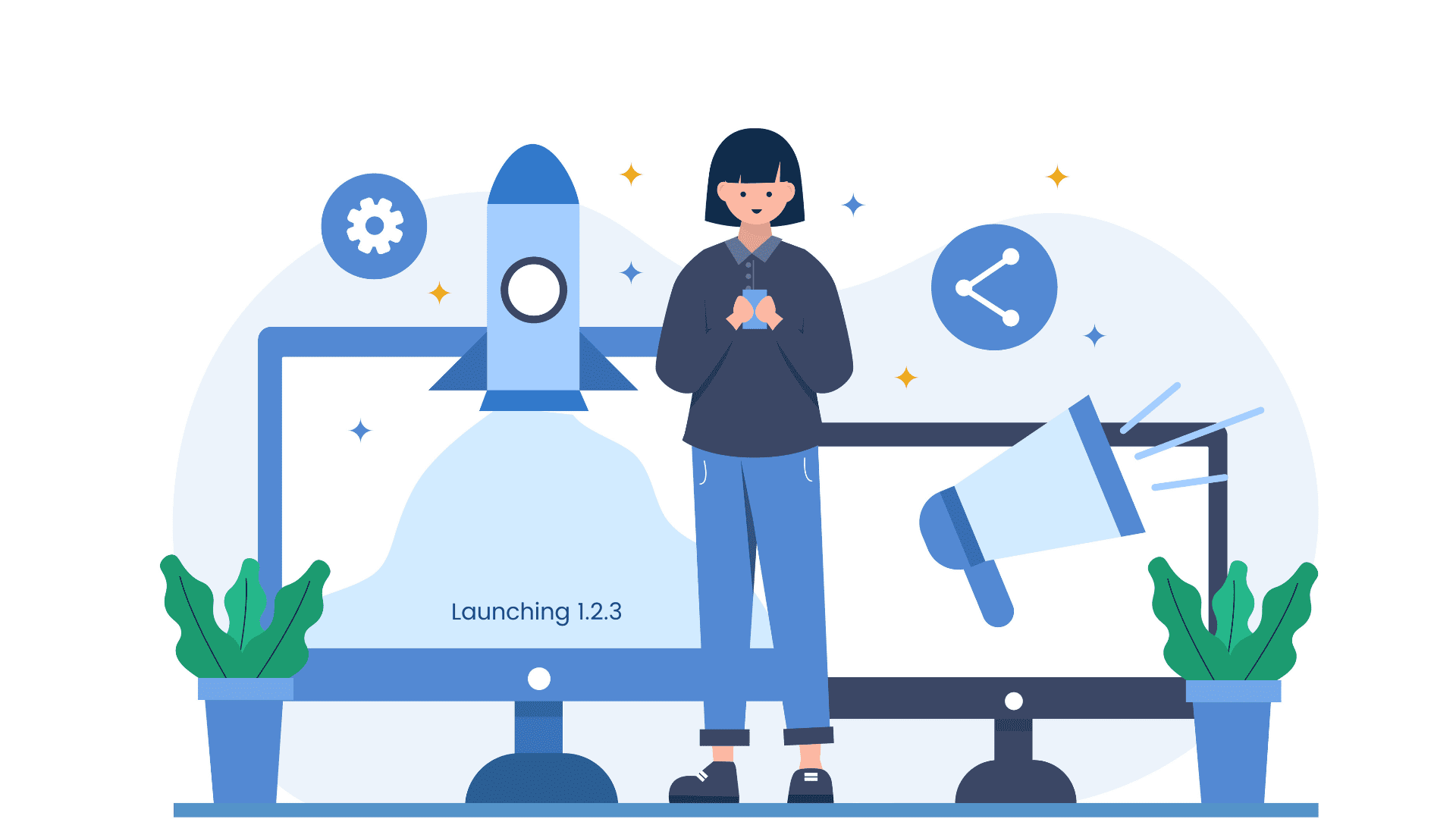 Technology is shaping our lives and the world around us in ways beyond our imagination. Today, we are more reliant on our hardware devices and software products & services than ever.

Businesses and consumers both make use of multiple tools and services when it comes to achieving their day to day goals. For instance, Google is the first thing that comes to our mind when we need to find solutions to our daily queries and requirements.

Similarly, AppMySite app builder software has become the go-to solution for the app building needs of all kinds of businesses. Tools like these have made life easier and have enabled us to save a lot of effort, time, and resources.

However, sometimes the jargon and other nuances associated with these software products and services can get confusing. One such complex and puzzling aspect is the version numbers.

You might have come across version numbers for your Operating System (Android or iOS), apps or software tools that you use, and more. If these numbers have been confusing you, then you have landed at the right place.

Understanding version numbering might not be as complex as your nomenclature lecture in Chemistry class, but it is not quite simple either. So, stay tuned and find out all that you need to know about software versioning.

What is a software version number?

A software version number is like an identification or declaration number for various releases and updates. It tells us about the changes and growth that shape the journey of a software or tool.

In general, a software version is a set of two to four numbers clubbed together and separated by periods or “.”. Depending on the software type, each set indicates a different set of information about the updates or changes made to the software (continue reading to find more).

Here, each set may have numbers in one or more digits, depending upon the transformation or growth achieved by the software tool or service. For example, if the latest version number of a software is 1.17.10 then each number (i.e., 1 & 17 & 10), indicate a different information related to the same product.

Let us explain it to you with one more example. If you have a WordPress site, you may know that first release of this CMS (Content Management System) for the year 2021 has been announced, and WordPress 5.7 has been named Esperanza. Evidently, here 5.7 is the version number and Esperanza is the version name.

Depending upon the software product or service and your settings, you may either get an auto-update when a new version is launched, or you may have to update it manually.

Bonus Tip: You can compare the current version of your software or product with the latest released version to see if you are up to date or not.

Suggested Read:  WordPress 5.6 is live. Here’s all you need to know about the new update

Some important facts about version numbering

We have learned that the basic purpose of version numbers is to depict the order or release and the degree of variation made to a product or service.

Now let us discover some amazing facts and insights related to version numbering. Version numbers not only denote that a product has been improvised and enhanced, but also tell us a lot about the various aspects and features of the product.

In general, the product version could imply any of the following two conditions:

Depending upon the brand and company preferences, version numbering may be used for a range of purposes. The pattern may differ from software to software, brand to brand, and more.

For instance, it can be used to denote any one or more of the following conditions:

This standard may vary based on the type of the product or service, preferences of the brand owner and the suitability based on a range of other influential factors.

What do software version numbers indicate?

Here we must note that in general practice, these numbers are non-negative integers and assigned in an ascending order, where the increase in numbers of a section depicts growth and development of that section.

As discussed in the sections above, the version number may be a collection of different set of numbers (mostly two to four numbers), each depicting information about a different level. Depending upon the range of changes, each set of number separated by periods can have one or multiple digits.

As a standard practice, the numbers give the following information:

This is one of the most common formats used by developers when versioning a software. However, it is noteworthy that there is no single standard practice when it comes to software versioning. Some common conventions and techniques used are: Semantic Numbering, Apache APR, Date of release, alphanumeric codes, and more. We are particularly discussing this one because this is one of the most commonly used techniques of software version numbering. Semantic versioning follows the above defined patter of Major, Minor and Patch fixes. The degree of change is conveyed by increasing the numbers accordingly.

Say if a version is labelled X.Y.Z., then X denotes a major overhaul. It denotes a significant and extreme-level change to the product’s API. In this case, the software becomes almost incompatible with the previous versions and signifies major development or advancement. For example, a change from 2.8.14 to 3.0.0 shows that the product has evolved on a huge level.

Here it is notable that as a convention, until a product is in the public domain, the developers number it by assigning “0” to the major section. This shows that the product is still being tested and is available to only in-house individuals for assessment or trial purposes. When launched, the developers may begin with the version number 1.0.0.

In the case of minor changes, the Y part of the version number is altered. This is done when new features are added to existing functionalities of the product. Here, the product still remains highly compatible with the previous versions.

Finally, the Z part of the version number depicts only nominal changes like patches and bug fixes. In some cases, these changes might not even be identifiable and not affect your overall experience in a huge manner.

Sounds confusing? Remember, that as the consumer, you only need to know the two most important things i.e., the technique of numbering used by the brand and the changes made to the version as compared backwards.

Many brands, including AppMySite, follow a standard practice of publishing release notes, that you can read and explore to find out about their latest updates, releases, launches, and more.

Suggested Read: iOS 14 update is here! Know how you can optimize your mobile app strategy for growth

The significance of software version numbers

Now that you know the science and technicalities behind software version numbers, it is time to know about the importance of version numbering.

Besides telling us about the version of the software, it ensures the following benefits listed below:

The basic function of version numbers is to attach an identity to various releases and development stages of a product or services. Hence, it makes every version identifiable and unique. For instance, if you list all the versions of a product from the oldest to the most recent, you can look at the numbers and tell the order in which the changes were released.

Clearly, it becomes easy for both brands and their consumers to identify the core aspects and features of the given version. On the other hand, it also makes it easier to log and record every change. This helps with the documentation and description of the software.

Different version numbers make it easier for the brand, the end consumer, and all other stakeholders to compare a specific release with other versions. It enables people to draw the differences and trace the growth and enhancements.

For instance, if you need to compare the performance of a product or service in the present time, with its performance at some point of time in the past, you will need the version numbers to identify and tell apart two releases.

Version list of a software service or product makes it traceable. It chalks out the journey of growth of a product and tells us how the product has evolved over a given period of time. It also indicates the changes that have been made to the product before it was brought to the public domain.

For instance, if a previous release version of a product is 1.2.14 and then next version is numbered 1.2.24 then it indicates that it went through multiple changes that were tested and monitored internally but were not deemed fit for public release. It also exhibits transparency and brand authenticity.

The way a company or entity numbers its version releases, tells us a lot about their approach. A standard approach indicates professionalism. Whereas an unmethodical numbering scheme shows lack of professionalism. On the other hand, a deviation from the standard technique, and a unique way of numbering the releases, depicts a brand’s messaging and tone.

Besides, a history of the release train with a good number of changes also shows that the brand is constantly working on enhancing their product. By knowing about the versioning scheme of a product, you can tell a lot about the brand.

Imagine referring to a release version without an identifiable version number. You cannot go around referring to the release as the “one that had the ABC features”. This will be like finding a house without an address.

Clearly, version numbers assign an identity to the different versions of a product and make it easier to communicate and hint at a particular version. It also helps a company in offering you the right kind of support in case of issues and complaints. AppMySite wants you to be informed as you explore the platform and make the perfect apps for your business. We understand that as the customer, you must know about your app builder and your apps.

At AppMySite, we use the standard versioning technique, as described in the sections below. With every minor or major release, the version number gets updated, depicting the changes made to the product.

The right most number depicts minor patches or bug fixes that we implement in order to iron out any kinks in the existing version. The number in the middle signifies some additional developments made to the previous version.

On the other hand, change and increase in the number on the extreme left depicts a major overhaul made to the app builder. Therefore, just by looking at these version numbers, you can tell a great deal about our development and assess how far we have come in the journey of making AppMySite app maker the perfect product for all.

For instance, the AppMySite mobile app plugin’s version 3.0.0 is now live. On the other hand, the Code Version 1.10.0 for Android and iOS has also been released recently. This release adds support for custom post taxonomies, enables connectivity using Application password, and more.

You can check out our release notes and keep a track of these changes as they go live. You can also go through our roadmap and know what to expect in the coming days on AppMySite.

That was all about software version numbering. Now that you are a pro, go ahead and share your wisdom and update your apps and other software to the latest version.

You can also read the other blogs by AppMySite and gain some wonderful insights about the mobile development and marketing industry, and a lot of other topics as well.

If you need to build an app for your business or upgrade an existing app, you can go through our tutorial blog and learn how to create an app without coding.

Build premium apps for Android and iOS users and launch them on the app stores. Enable mobile-friendly users to reach you with a click and grow your business.