How does App Store Optimization differ for Google Play and Apple App Store? 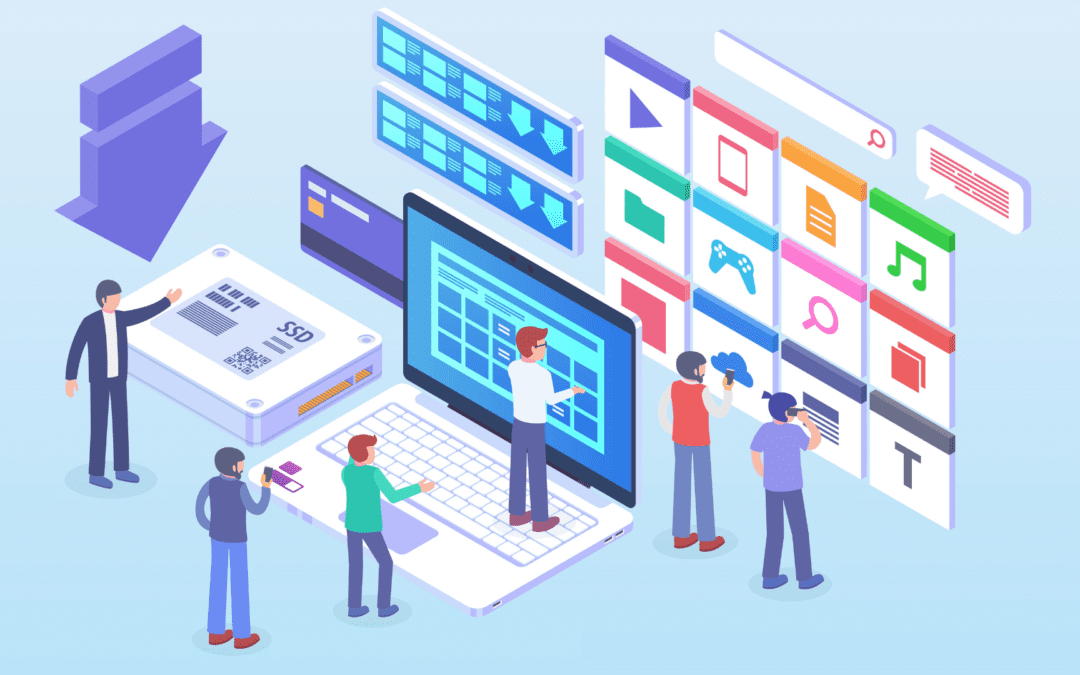 Very rarely do prominent apps only feature on either Google Play or Apple App Store alone. The aim is always to make your own app for both Android and iOS devices.

Reliable app making tools like AppMySite have already made this proposition much easier. App companies don’t need to hire an army of developers to create both Android and iOS apps. Cross-platform development is thus a simple matter of minutes now.

The main challenge then becomes app marketing. App store optimization (ASO) is the first practice which comes to mind. It is the best way to start off your app marketing efforts and get organic app downloads.

Any well-read app marketer would understand ASO on a basic level at the very least. It is a way to establish a channel for organic app downloads by optimizing the metafields of an app listing.

And yet, there are some clear differences. Anyone working on ASO for both Android and iOS apps should understand these differences.

App development is already easy thanks to tools like AppMySite. Even building something as complex as an ecommerce app is easy now. A user can learn how to convert a WooCommerce site into an app on AppMySite within minutes. The challenge thus lies beyond development. Mobile app marketing is the next great hurdle and understanding app store optimization is part of the same exercise.

The following sections cover some of the relevant demarcation points where Google Play and App Store ASO differ.

Many ASOs don’t consider backlinks a relevant ranking factor on app stores. Link building is generally deemed an important factor for website SEO. It doesn’t have any direct relation with the ranking of an app on the app stores.

Here’s the point of difference – Apple App Store does not consider backlinks a relevant factor. Google Play does.

There are a number of credible case studies that confirm a correlation between backlinks and Google Play rankings at the very least. To understand why backlinks are an important factor, we have to understand how Google generally compares different websites and apps.

In the early days of SEO when mobile apps were not a thing, Google used a search algorithm called PageRank. This algorithm ranked websites in search simply based on the number of backlinks each had. The reasoning was simple. Google viewed every backlink as a general vote of confidence from website to another.

This algorithm eventually got shunted because SEOs began leveraging shady link building schemes to manipulate high volume search pages. Backlinks are still an important ranking factor now even though other verticals like content and user experience have become more important.

Google’s approach to web search should tell us a lot about its app store search strategy as well. Google has never officially said backlinks are a factor. However, apps with more backlinks do seem to rank higher.

Does this mean you should attempt elaborate link building schemes for your app store page?

You will do more harm than good getting sub-standard backlinks for your app store. Target niche websites and aim to actually attract the visitors of those websites to your app. App store backlinking is not as instrumental as general website off page SEO. Only target the best websites in your niche.

The difference in search layout makes a huge difference in the larger scheme of things. Google Play’s search tiles are succinct. They only contain the app title, icon, and the rating. The space afforded to any given app in the search results is thus very low. Apps cannot afford to get fields like app name and icon, not to mention optimize their rating score.

The case is different for the Apple App Store. The search results contain app title, subtitle, icon, screenshots, and promo video. Thus, many elements of an app listing come to the fore on App Store search. Making someone click through the search page and onto the app store page requires optimization on app fronts.

These differences basically imply a change in approach. Google Play ASO requires a greater focus on app title because it comes front and centre in app store search results. On the App Store, the overall quality of your app listing is allowed to shine through. The app title is thus less important in bringing visitors to your app store page.

Google Play and App Store have a different approach to displaying a short line to describe an app.

Apple App Store does not provide a separate short description field. It instead provides a field for a subtitle. The subtitle appears right below the app title and thus takes a place of great prominence on an app store page. The limit for a subtitle is also capped off at 30 characters.

The difference in character limit and placement changes the way users approach writing copy for both.

A short description is not long enough to be a full sentence or short enough to be a tagline. Since it remains out of the immediate view of app store visitors, it makes sense to use this space to add relevant keywords. Short descriptions thus become an area to be used solely for ASO purposes.

The same is not true for a subtitle on the Apple App Store. Since it appears right below the app title, it must most of all represent the app functionality. Many users tend to stick with their brand motto in the tagline. This is typically a catchy tagline to attract visitors. Users generally cannot afford to solely focus on ASO when framing a subtitle. This is a luxury while writing a short description for a Google Play listing.

Both Google Play and the Apple App Store provide users the option to upload an engaging promo video. This video should typically explain the basic functioning of the app and introduce the brand as well.

While both app stores enable users to upload app videos, there are some key differences.

Google Play only accepts the YouTube link of the video you want to upload. Thus, you need to first upload your app promo video to YouTube. It is thus advised you create a YouTube channel for your app or brand. Google Play also has no restrictions on the length of the video. You can thus create an engaging and informative video without worrying about the timeline.

The Apple App Store accepts videos in a raw format. You thus don’t need to first upload the video on YouTube.

However, there are other areas where Apple differs vastly from Google Play when it comes to promo videos.

For one, Apple App Store displays promo videos on the search results page. You furthermore have to keep the video under thirty seconds. Apple allows you to upload a total of three 30-second videos. The first video is shown on the search results page and the other two are shown on the app listing page below the screenshots. These little videos are known as app previews on the Apple App Store.

These differences in video guidelines naturally forces app companies to adopt a different approach for each. A video for Google Play can be informative, but the same is not true for the Apple App Store. The placement of the video also underlines their importance.

A good video can matter a lot on the Apple App Store where visitors will see it on the search results page. On the other hand, an app promo video only takes secondary significance on Google Play.

What is the point of difference? This field is not available when users are uploading an Android app to Google Play.

Google has a natural ability to provide high quality search results based on metadata alone. This is because it has a web search engine as a reference. The same cannot be said about Apple though.

It thus asks app companies to submit the exact keywords they wish to rank for. In some ways, this makes App Store ASO much easier than Google Play ASO. Users have to worry less about optimizing app titles and other meta fields in the Apple App Store because there is a separate field to enter specific keywords.

Google Play considers long description an essential ranking factor. Users are thus advised to optimize it with as many relevant keywords as possible. The prescribed keyword density is between 2-3%. This basically allows Google Play to know which keyword to associate an app with.

This is a huge difference on many levels. Many ASOs wrongly consider Google Play and Apple App Store fundamentally similar. Discounting long description as a ranking factor shows that the Apple App Store doesn’t stake a lot of value on the presence of keywords in an app listing. This is at least in comparison to Google Play.

This is not the case for Google Play. A good mix of keywords in the long description can be the difference between ranking first for a keyword and landing somewhere down on the charts.

Both Apple App Store and Google Play enable users to upload screenshots and present the best version of their app. There is however a difference the display of these screenshots on both app stores.

Firstly, the Apple App Store provides users the option to upload upto ten screenshots. On Google Play, there is a limit of eight screenshots.

The main point of difference is the placement of these screenshots. The Apple App Store displays the first three screenshots you upload on the app search results. This makes it very important for app companies to make their screenshots standout.

Google Play only displays screenshots for branded search terms. If you just enter a generic keyword, Google will not display screenshots in search results Thus, screenshots are much more important for the Apple App Store because a set of good ones will automatically improve the click through rate and installation success.

The following table sums up the various ASO differences between Google Play and Apple App Store.

AppMySite offers a direct path to anyone who wants to create an app using a mobile app builder without coding. There are very few DIY app making solutions like AppMySite in the market.

However, AppMySite doesn’t just help users build mobile apps. We also provide a number of other add-on services that help improve the design, performance, and overall functionality of the mobile apps built on our platform.

One such service we provide is through the App Store Optimization add-on. Anyone who buys the add-on on AppMySite will get optimized meta field content. This will include content for app title, short description, long description, and subtitle. Furthermore, the content users get will be optimized for the right keywords as well.

Another add-on users can avail to improve their app listing is the App Store Design add-on. This add-on will provide users quality graphics for app icon, screenshots, and feature image. Some of the most talented designers in the space will deliver artwork for these elements. It is thus important for AppMySite users to at least consider this add-on for enhancing the visual aesthetic of their app store listing.

AppMySite is beyond being just a free online app maker. A typical user on the platform is essentially part of an ecosystem where a whole-range of app-related solutions are provided.

App store optimization is not complicated. It does however take some level of knowledge and patience to get results with ASO. Generally, app companies with both an Android and iOS app in the market approach Google Play and App Store ASO the same way.

This piece discusses the faults in the approach. Even though there are ASO similarities in both Google Play and App Store, the differences are also important. These differences can often make or break the performance of an app from an ASO perspective.

The points made here will help readers understand these differences and suitably tweak their ASO strategy. This approach promises more app downloads and organic store visibility.