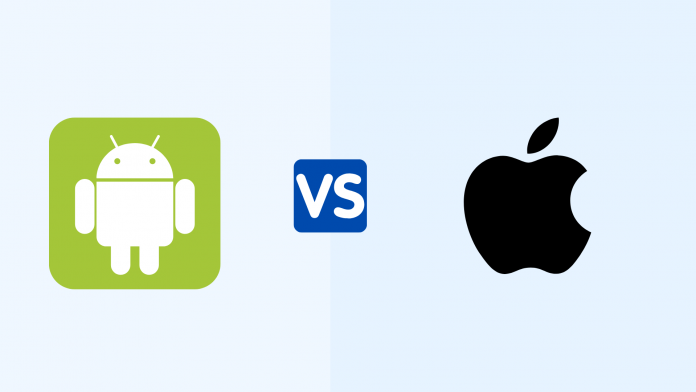 The fight for supremacy between Android and iOS has been existent since years. It is only reasonable to vouch for both as each of the two has its own unique characteristics and benefits.

However, what is important, is for businesses to understand their potential users’ behaviors before they create an app online and launch it on the app stores.

Having an idea of the standard behavior and preferences of your Android and iOS users can open doors to many opportunities.

You can identify which group is most suitable for your business goals and what are the best strategies and mediums to approach them. It can also make you capable of addressing the specific needs of your target audiences.

Today, we are here to help you with the same. So, let’s get started and learn how Android and iOS users differ from each other and what impact the differences can have on your business.

Android vs iOS users: An overview of the market share

Android and iOS together make-up for more than 97 percent of the mobile operating system market share globally.

These two are the primitive platforms that every mCommerce business aims for. However, they differ highly in terms of infrastructure, features, technology, etc., thereby attracting varied kinds of audiences and inspiring different kinds of behavior in them.

Let us introduce you to some more fascinating facts and numbers that will give an overview of the differences between the Android and iOS operating systems and their respective users.

These are only some of the stats. As we continue, you will learn more about the purchase and spending behavior of Android and iOS users.

However, the stats give a fair idea about the basic user distribution between Android and iOS platforms, their demography and more.

While iOS has a niche market that relies heavily on Apple’s brand name, Android is more popular and widely used by people belonging to all kinds of social and economic groups.

Suggested Read: The best strategy to reserve a name for your Android and iOS apps

Before we get into other details, let us tell you about the switching tendencies of Android and iOS users.

It is true that there is a great number of Android users who are bowled by the charm and hype of Apple devices and would buy one if they have the resources.

However, this may come as a shocker that there are quite a number of iOS users too who would ardently make a shift to Android.

Let us validate this with some statistics.

Interestingly, Apple itself admitted that 26 percent of iPhone users moved to Android in 2020. While it claims it is not concerned about the switch, the stats are still alarming.

SellCell, a smartphone price comparison and reselling platform, recently conducted a survey with 5,000 Android users in the United States.

31.9 percent of Android users ticked ‌iPhone 13‌’s lack of a fingerprint scanner as the reason behind not switching to iPhone. 16.7 percent named iOS’s limited customization and 12.8 percent pointed to iOS’s lack of support for side loading apps as the main reasons for not switching.

Clearly, it is not all gold and glitter for the iOS industry too. However, what remains constant is that both Android and iOS users are smart enough to take strategic decisions use the services and benefits accordingly.

We will discover Android vs iOS user loyalty in detail in the sections below.

The two play a decisive role in how the apps placed on their platforms shape up and function and have clear policies for the same. This often leads to a considerable influence on how the Android and iOS users respond to the apps on their devices.

For instance, Apple is far more stringent than Google when it comes to app submissions and clearances. Thus, an iOS app is more likely to face rejection as compared to an Android app. This is probably why there are more apps on Google Play Store than Apple App Store.

Additionally, the security and privacy policies and restrictions are also denser on Apple as compared to Google. As a result, Android users can be reached more easily through push notifications and personalized advertisement and marketing content.

While this also increases the competition, it makes Android a better choice than iOS if you want to send messages and notifications to your users more freely.

As discussed earlier, Android users outnumber iOS users, and are scattered all over the world.

However, Android is more popular in developing countries and low to mid income areas. On the other hand, iOS has a bigger market in developed countries and among the high-income groups.

Let us understand how demography influences the behavior and decision-making tendencies of Android and iOS users based on various parameters:

It may also not come as a surprise that men are more likely to own an iPhone as compared to women.

However, as per a survey conducted by the Mobile Ecosystem Forum, 51 percent respondents that were Apple smartphone users, identified as female. So, the number could be erratic and may vary highly in different countries.

Women are also more likely to make in-app purchases than men. In fact, as per a 2018 report by Liftoff, the in-app purchase conversion rates for women were 26 percent higher than for men.

The numbers go way higher when annual household income is considered. As education often affects income and living, one may also see trends that indicate the popularity of iOS over Android among those with higher degrees and those living in more urbanized areas.

However, this is a very general overview and things may differ under different circumstances on a more granular level.

It is true that there are more Android apps than iOS apps in the world and more Android apps are being downloaded by users every minute. However, this trend is not emulated when it comes to the revenue and earning through apps.

Let us understand this with some statistics:

As evident from the stats above, iOS users spend more as compared to Android users. However, the trend is changing steadily as Android users have also started entrusting apps with their money.

As per Liftoff, it happened for the first time in 2017 that the industry started to see high-grossing games that made the same amount of IAP (in-app-purchase) revenue on both platforms.

This clearly signifies that Android users are willing to spend but they just need to be targeted in the right way.

Additionally, the lower revenue through Android does not hurt as much because the cost of user-acquisition is also low for Android users.

As per the report discussed above, acquisition of Android users only costs around USD 6.37. An impressive install-to-register rate of 52 percent (8.4 percent more than iOS) adds even more value to this target group.

Additionally, while iOS users are more eager to make payments and purchases, their registration rate is lower than that of Android users. However, iOS users spend more on clothing, cosmetics and even tech products as compared to Android users.

Clearly, Android users spend less than iOS users, however they are a better target audience for revenue through in-app advertisements.

Suggested Read: Retention vs Acquisition – Where should app startups focus their efforts?

User retention and engagement play a major role in the success of any app. In this section, we will explore the same avenue and compare it for Android and iOS users.

As discussed above, iOS users spend more than Android users but are costlier to acquire. However, when we look at the loyalty trends, Android and iOS users are at par with each other.

However, as iOS apps users have fewer options as compared to Android users, they are more likely to be loyal and not look for alternates as frequently.

However, when it comes to engagement through push notifications, Android takes a lead over iOS even though iOS users are more likely to open a notification faster than Android users.

Talking about in-app messages and prompts, iOS has an open rate of 9.9 percent, compared to Android’s 7.26 percent. The conversion rate for these messages stands at 3.83 percent for iOS and 3.35 percent for Android.

However, we must remember that Android is a better platform if you earn engagement and revenue through ads. Therefore, we can say that both the platforms have a great number of audiences that is unique, and they enjoy considerable loyalty.

Suggested Read: Discover the advantages of Retention Marketing for eCommerce and make the most of it

Android and iOS users are both essentially the same but differ somewhat in their preferences and browsing and shopping behavior. Therefore, you must keep it at the core of your business decisions when you are aiming to target them.

As discussed above, you can go with iOS if you are looking for more in-app purchases and with Android if you want to target a broader audience.

However, we suggest that you make the most of both worlds. Why not target both Android & iOS users when you can publish apps for both on an optimal budget?

You can sign up for AppMySite’s app maker for free and build premium feature rich apps. Try it to believe it!

Also, do not forget to explore our other blogs and drop your feedback in the comment section below. We love hearing from you!